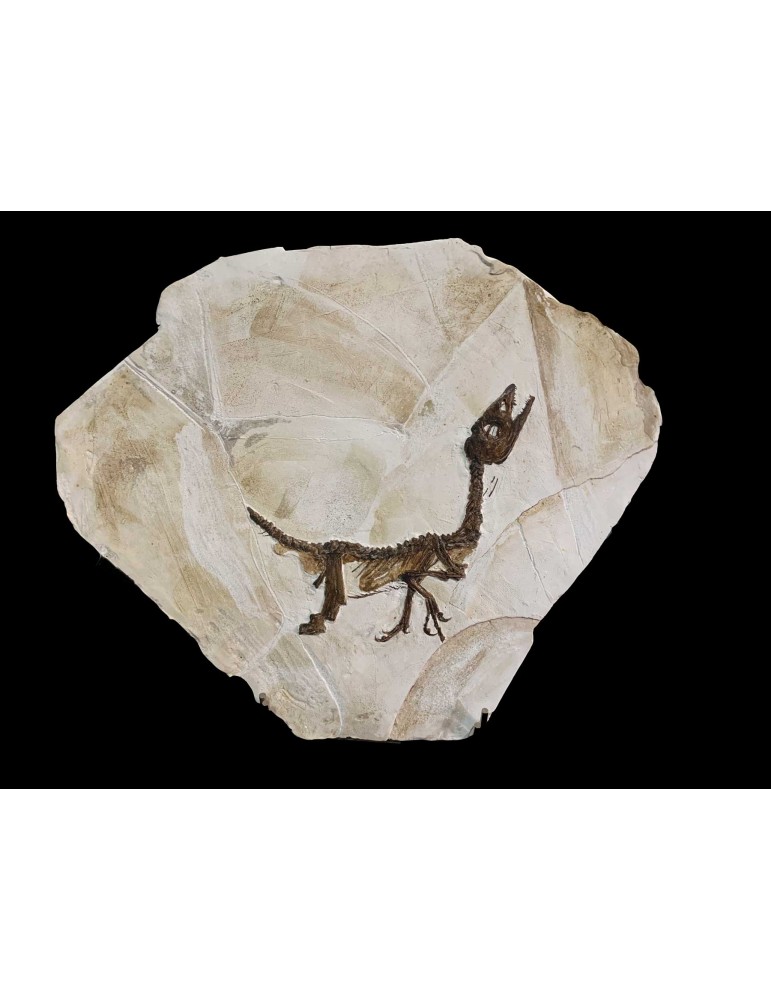 on paint and modeled plaster slab

Scipionyx (whose name means "Scipione claw") is an extinct genre of Teropode dinosaur who lived in the Albiano plan of the lower Cretaceous, about 113 million years ago, in Italy.

The genre contains a single species, S. Samniticus, known by a single fossil, discovered in 1981 by an amateur paleontologist and brought to the attention of science in 1993, and then be described and appointed in 1998.

See our Shipping and Returns page

The discovery of this specimen has had a significant impact in paleontology for several reasons: Scipionyx represented the first dinosaur found on Italian soil, also its state of preservation is such as to preserve large areas of stoned tissues and internal organs such as muscles and intestines. The specimen shows several details of the internal organs, even the internal structure of some muscle and bone cells. Given its importance in understanding the anatomy of the dinosaurs, the specimen has been widely studied, and has been nicknamed "Ciro" by the Italian popular press, which has widely advertised its discovery.

The specimen represents a very young individual only half a meter long and, perhaps, just three days of life. Its adult size is unknown. Scipionyx was a bipedal predator, who balanced the body thanks to the long tail. His body was probably covered with primitive feathers, although these were not preserved in the specimen that lacks any external tag.

In the bowels of the specimen there are still the latest semi -content meals of the animal, indicating that Scipionyx feeds on lizards and fish. Perhaps these had been given to the young man by his parents. Several scientists have tried to learn from the position of the internal organs such as the animal breathed, but their conclusions have often disagreed.

The classification of Scipionyx is somewhat uncertain, as the animal represents an individual too young in order to be able to precisely indicate which Clade it belonged to. Most paleontologists ranking him as a member of Compensognathidae, a family of small celurosaurs.